Prices are fixed for up to 4 persons. We do not provide additional passengers to fill up the 4 passenger quote.

Included:
Private photo guide
Transportation with comfort by an air-conditioned SUV.
Hotel Pick up and dropoff

Book Now
Landmannalaugar is an enchanting and colourful and yet secluded area in the uninhabitable highlands of Iceland on the edge of Laugahraun lava field, erupting in the late 15th century. The Landmannalaugar area is known for its rhyolite formations and geothermal activity, the steaming hot springs and the fumes rising up from the crackling surface, proving that Iceland is indeed a living and breathing phenomenon. The ever changing landscape, still sculpted by the fierce winds, creates optical fascinations with its crystal clear waters reflecting the mood on the day and the rugged and dramatic lava fields covered with the soft blanket of the brightest green moss, even in the middle of winter. The majestic mountains are standing monuments of the power shaping the area with minerals emerging from the hot springs, offering diverse and vibrant pallet of different shades of yellow, green and red. 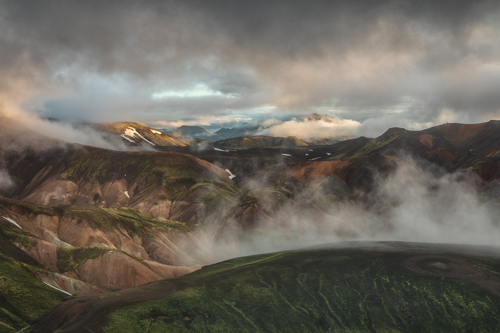 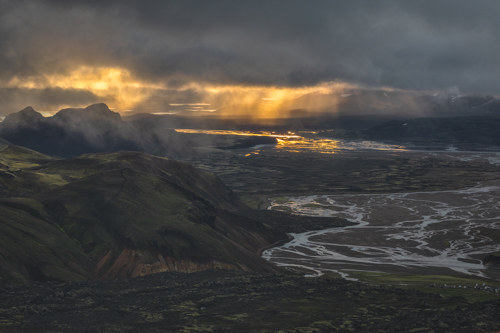 To reach this beloved gem we cross rivers and drive along gravel roads in the rough conditions of the Icelandic highlands called Fjallabak Nature Reserve. The area is only accessible with a 4×4 jeep and open mainly during the summer.
Driving along the deserted, dark and seemingly gloomy highland route, you will be delighted to reach this colourful, unique haven, glowing in the Icelandic midnight sun.
There is a natural geothermal pool in Landmannalaugar, perfect to soak in at the end of a magnificent day of panoramic soulfood.

Other breathtaking stops on the day
Very close to the famous Mt. Hekla volcano, which crater was infamously considered to be the entrance to hell, we stop at Háifoss waterfall, the third highest waterfall in Iceland, situated in Fossá river. The water drops about 122m into beautifully sculpted gorge, caressing different layers of rock formations. 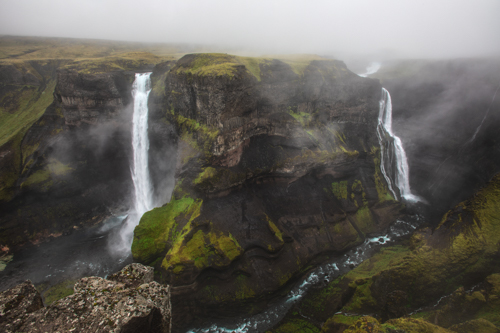 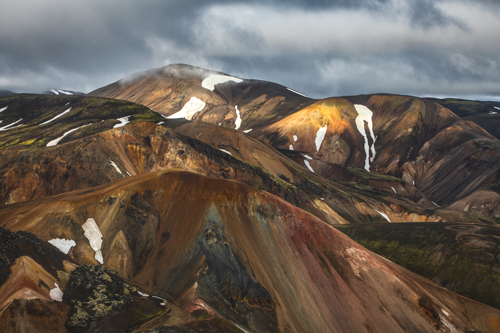 We also stop at two different lakes in the vicinity of Landmannalaugar, lake Frostastaðavatn and Ljótipollur crater. The former, Frostastaðavatn is the larger lake with fascinating volcanic formations. The latter, Ljótipollur, is in fact a dormant crater and often mistakenly translated as ‘Ugly puddle’, ‘ugly’ being the current translation and use of the word ‘ljótur”. Originally however, the word “ljótur” means ‘light’ or ‘bright’ and it is far likelier this little magical lake takes its name by the amazing reflections and expressions of light, it has to offer.